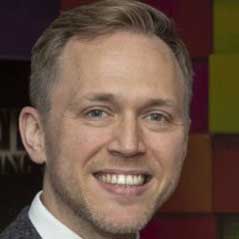 Show More
Show Less
James began his dancing career at the age of 2½, all thanks to Top of the Pops and Adam Ant! After perfecting the routine to ‘Prince Charming’, his parents, recognizing his talent, enrolled him in local dancing classes. He studied tap, ballet and jazz as well as ballroom and Latin up until he was 9 years of age, when he started to compete in ballroom competitions. James quickly established himself amongst the top ballroom dancers in the UK, winning a string of juvenile and junior titles. As a competitive adult ballroom dancer he established himself as one of the UK’s top amateurs, regularly finishing in the top 6 in England and in the quarter finals of most international championships. He ranked as the UK Ten dance champion and was very privileged to represent England at the World Championships where he finished 9th. In 2004, James decided to turn professional and took 3 years away from competitive dancing to concentrate on teaching – and to find the right person with which to start a new chapter in his dancing career. Over the years, his dancing has become his number one passion and we can’t imagine anyone better to join our Passion to Dance cruises. Don’t be fooled by all those titles, James is a charming and proficient social dancer.
0